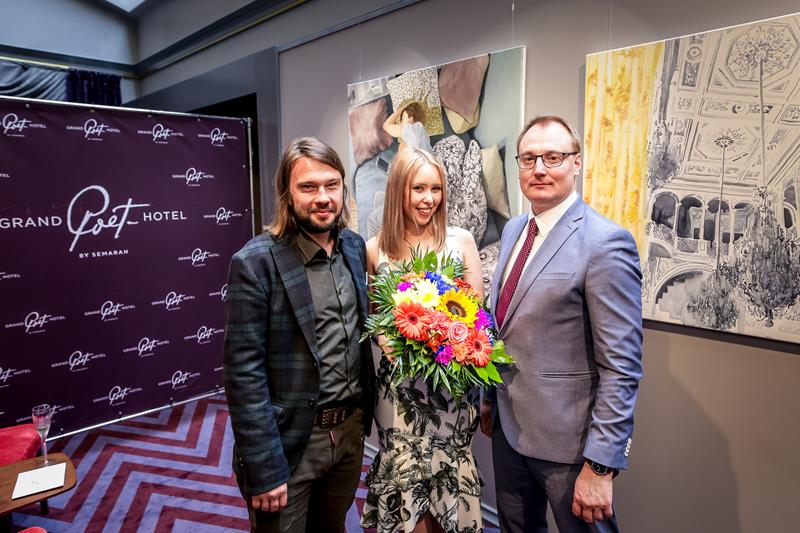 Marking one year since the launch of cooperation between the Art Academy of Latvia (AAL) and Semarah Hotels to support young and talented Latvian artists, on Wednesday, July 10, the fourth solo exhibition opened at the design hotel Grand Poet Hotel. Until October 10, anyone interested will have the opportunity to see the works of Agate Bernāne, a student pursuing a bachelor’s degree in painting at the Art Academy of Latvia. The exhibition is titled “Girl with a Canary” (Meitene ar kanārijputniņu).

“I believe that a good artist must challenge him or herself. While working on my paintings, I do a great deal of research and also dispute my own thoughts. It creates new ideas and changes the view of what is happening around. Inspiration to paint comes completely unexpectedly. Anything can cause it – a dusty windowsill, a pile of laundry, broken nail polish, tension, dreams – everything that creates the respective feelings. Sometimes it’s easier to paint than to find the right words to explain how I feel. In the process of creation, I seem to merge with the work I am creating, give it my inspiration, so that it can continue to live independently,” says Agate Bernāne, urging anyone interested to come see the exhibition.

Inese Baranovska, head of the Museum of Decorative Arts and Design of the Latvian National Museum of Art and lecturer at the Art Academy of Latvia, emphasizes that Agate’s works stand out among other students with their unusual perception of the world. “Her paintings have a visual sensitivity, the ability to see and behold. The artist reflects on the processes of everyday life, but in every seemingly banal routine phenomenon she tries to capture the entire universe, connecting the forms of the past, present and future. In the painted visions, everyday reality alternates with imaginations and dreams – replicas of art history, travel notes, popular cultural signs and rituals of everyday life,” Inese Baranovska says about her student’s works.

The paintings at the exhibition have been made during the last two years. The artist philosophically explains that they are paintings of one and the same dream. Being in front of the canvas, brushes and paints evokes the pleasant excitement of meeting a canary. In the dream, the girl is visited by a canary. She feeds and strokes it. Within the white walls of the apartment, she lets it fly. The bird has neither a name nor a certain age, she does not know where the bird comes from and where it disappears, but she feels attached to it. The food and water feeders for the bird are empty, and the girl feeds it again, caresses it and listens to its song. This is how they meet – sometimes often, sometimes less often – for almost two years.

Agate Bernāne was born in 1996. She has studied at Janis Rozentāls Riga Art School (2012–2016) and is currently pursuing a bachelor’s degree at the Art Academy of Latvia. She has participated in such projects as “Film Art Action Party” (2015), “Art Belongs to the People” (2015), “RAF. Jelgava. Art.” (2013), as well as in several group exhibitions. Twice (2014, 2015) she has received the excellence scholarship of Petr Aven charity foundation Generation (Paaudze). In June of this year, she represented the AAL at the international contemporary art fair ArtVilnius’19.

The exhibition at Grand Poet Hotel is the artist’s first solo exhibition.

Any visitor can vote for his or her favourite painting by assigning a special sticker to it – a five-grand coin available at the hotel. Māris Alnis, head of Grand Poet Hotel, explains that at the end of each quarterly exhibition, the hotel purchases the highest-voted painting of the exhibition to create a unique collection of works by young Latvian artists, Grand Poet Art Collection. At the moment, the collection already includes works by three young artists – Madara Kvēpa, Justīne Seile and Ella Mežule. The paintings are now showcased in the hotel to delight visitors, art and life lovers from all over the world. The next exhibition will open in the autumn.

Grand Poet Hotel was opened by Semarah Hotels, a hotel chain founded in Latvia. At the moment, the hotel chain includes resort hotel Lielupe in Jūrmala and two hotels in Riga: the four-star historic Metropole hotel on Aspazijas Boulevard and the elegant five-star design hotel Grand Poet Hotel at 5/6 Raiņa Boulevard. Each one has its own unique story to tell.

Grand Poet Hotel’s Diplohemia concept combines diplomatic and bohemian design solutions developed by the internationally acclaimed and award-winning concept and design agency Stylt Trampoli (Sweden). The hotel was designed by the architectural firm Sarma un Norde (Latvia), preserving the architectural uniqueness of the building. The name of the hotel carries a duality that is often embodied in poets – earnest and bohemian.

This website uses cookies to improve your experience while you navigate through the website. Out of these, the cookies that are categorized as necessary are stored on your browser as they are essential for the working of basic functionalities of the website. We also use third-party cookies that help us analyze and understand how you use this website. These cookies will be stored in your browser only with your consent. You also have the option to opt-out of these cookies. But opting out of some of these cookies may affect your browsing experience.
Necessary Always Enabled
Necessary cookies are absolutely essential for the website to function properly. This category only includes cookies that ensures basic functionalities and security features of the website. These cookies do not store any personal information.
Non-necessary
Any cookies that may not be particularly necessary for the website to function and is used specifically to collect user personal data via analytics, ads, other embedded contents are termed as non-necessary cookies. It is mandatory to procure user consent prior to running these cookies on your website.
SAVE & ACCEPT