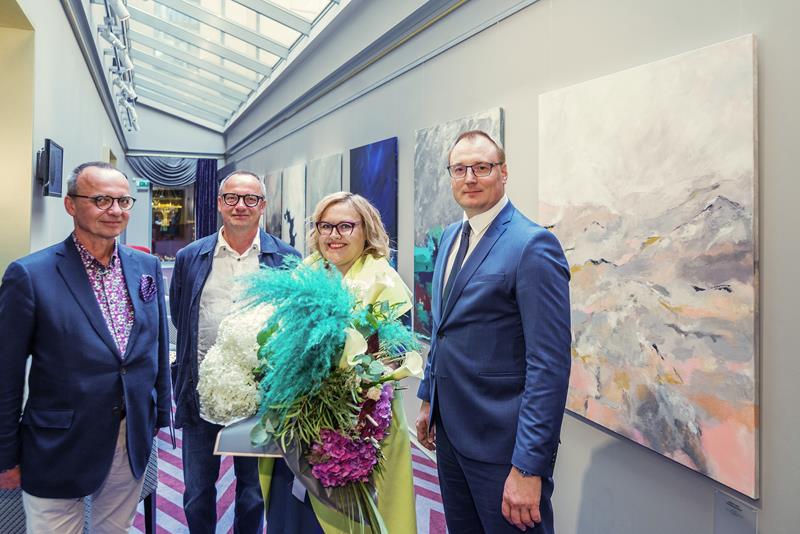 The Art Academy of Latvia continues to cooperate with Semarah Hotels to support young and talented Latvian artists, and the sixth solo exhibition opened at Grand Poet Hotel on Wednesday, August 12, featuring works by LAA graduate Laura Veļa. The exhibition is titled “Nekas/Nothingness” and it will run until November this year.

Painter Laura Veļa, an AAL graduate whose works are currently exhibited at Grand Poet Hotel: “When I’m working, the creative impulse comes from the social environment and observations, but the sources of inspiration for the works at the exhibition include music, feelings and colours. These works portray abstract, mystical places where nothing happens, which are in an intermediate state before something. That moment of endless possibilities to me is the big NOTHINGNESS.” The artist explains that the sole purpose of the paintings is to take the mind to a peaceful, visually meditative state, when the mind is quiet, without any thoughts, dogmas, ideas and concepts.

Laura Veļa was born in 1983. She enrolled at the AAL (2013–2017), first obtaining a bachelor’s degree in painting, later, thanks to a scholarship from the Boris and Inara Teterev Foundation, she continued studying for her Master’s degree at the AAL Painting Department (2017 – 2019). Laura Veļa’s works are in private collections in Latvia, the United States, Netherlands, France and Germany. This is the artist’s fourth solo exhibition.

“Laura has her own worldview, own opinion of the world and life, and the ability to reflect this in her works, experimenting and trying to find a new dimension. The works are notable for their directness, simplicity of form and, most importantly, you just want to look at them. In my opinion, Laura already has earned a prominent place in the Latvian art world and is a remarkable artist,” painter and AAL Professor Kaspars Zariņš comments on the graduate’s talent.

Every visitor to the gallery can assess the works at the exhibition by awarding a five-grand sticker coin to his or her favourite painting. The voting stickers are available at Grand Poet Hotel.

“This is our first solo exhibition this year. It is great to be back after a long break and see that the young artist has been able to pleasantly surprise us, because her works not only reveal the story of the exhibition, it is also a story about herself,” says Māris Alnis, Head of Grand Poet Hotel, adding that works of art at the hotel make hotel rooms more lively.  That is why Grand Poet Hotel will continue building its unique and inspiring collection of works by young Latvian artists, buying a painting most popular with the visitors at the end of each exhibition to include it in the Grand Poet Art Collection.

Currently, the collection already includes five works by young Latvian artists – Madara Kvēpa, Justīne Seile, Ella Mežule, Agate Bernāne, and Kristīne Rublovska. The paintings are now showcased in the hotel to delight visitors, art and life lovers from all over the world.

Grand Poet Hotel was opened by Semarah Hotels, a hotel chain founded in Latvia. At the moment, the hotel chain includes resort hotel Lielupe in Jūrmala and two hotels in Riga: the four-star historic Metropole hotel on Aspazijas Boulevard and the elegant five-star design hotel Grand Poet Hotel at 5/6 Raiņa Boulevard. Each one has its own unique story to tell.

Grand Poet Hotel’s Diplohemia concept combines diplomatic and bohemian design solutions developed by the internationally acclaimed and award-winning concept and design agency Stylt Trampoli (Sweden). The hotel was designed by the architectural firm Sarma un Norde (Latvia), preserving the architectural uniqueness of the building. The name of the hotel carries a duality that is often embodied in poets – earnest and bohemian.

This website uses cookies to improve your experience while you navigate through the website. Out of these, the cookies that are categorized as necessary are stored on your browser as they are essential for the working of basic functionalities of the website. We also use third-party cookies that help us analyze and understand how you use this website. These cookies will be stored in your browser only with your consent. You also have the option to opt-out of these cookies. But opting out of some of these cookies may affect your browsing experience.
Necessary Always Enabled
Necessary cookies are absolutely essential for the website to function properly. This category only includes cookies that ensures basic functionalities and security features of the website. These cookies do not store any personal information.
Non-necessary
Any cookies that may not be particularly necessary for the website to function and is used specifically to collect user personal data via analytics, ads, other embedded contents are termed as non-necessary cookies. It is mandatory to procure user consent prior to running these cookies on your website.
SAVE & ACCEPT